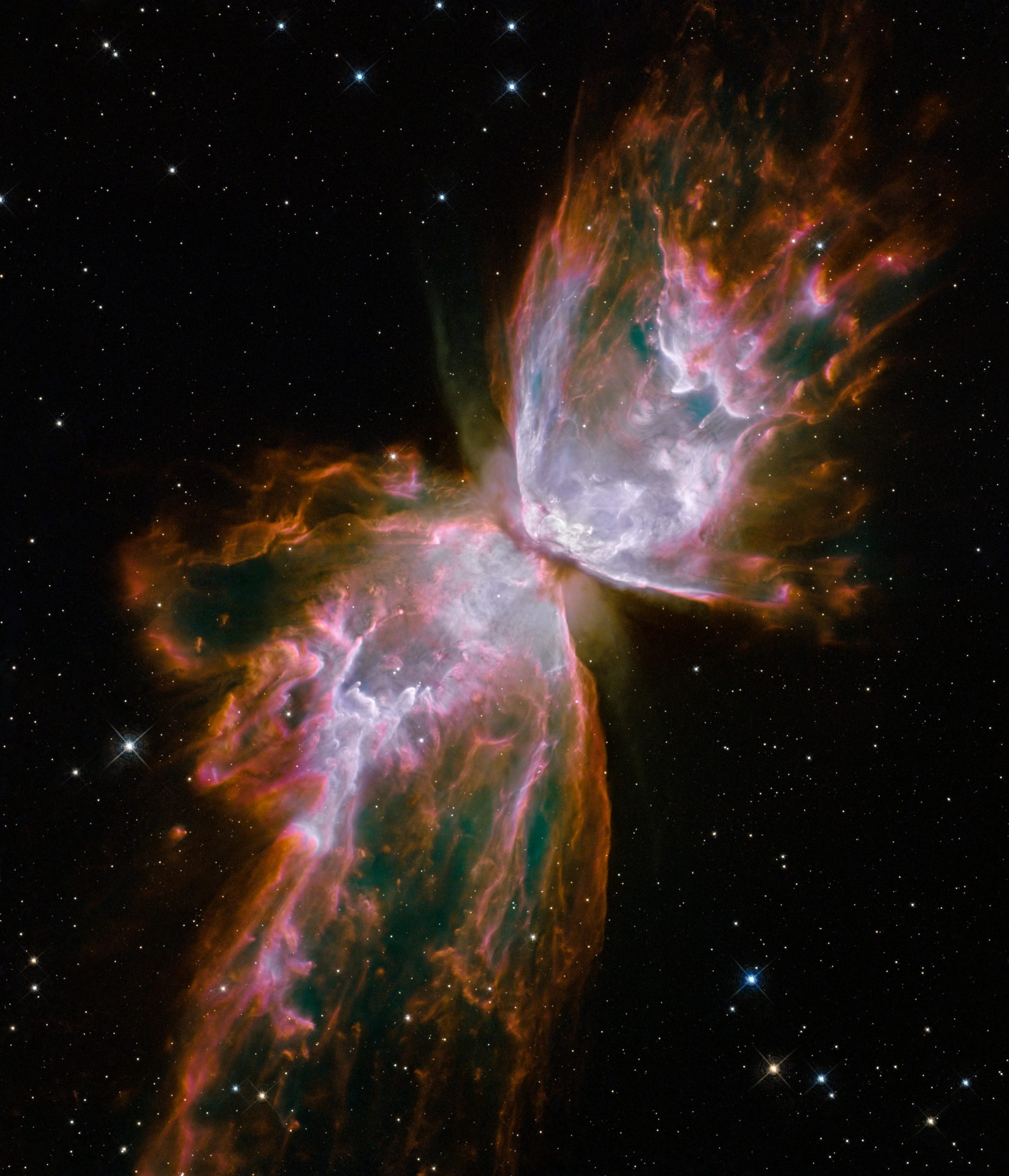 This celestial object looks like a delicate butterfly. But it is far from serene. What resemble dainty butterfly wings are actually roiling cauldrons of gas heated to nearly 20 000 degrees Celsius. The gas is tearing across space at more than 950 000 kilometres per hour — fast enough to travel from Earth to the Moon in 24 minutes! A dying star that was once about five times the mass of the Sun is at the centre of this fury. It has ejected its envelope of gases and is now unleashing a stream of ultraviolet radiation that is making the cast-off material glow. This object is an example of a planetary nebula, so-named because many of them have a round appearance resembling that of a planet when viewed through a small telescope. The Wide Field Camera 3 (WFC3), a new camera aboard the NASA/ESA Hubble Space Telescope, snapped this image of the planetary nebula, catalogued as NGC 6302, but more popularly called the Bug Nebula or the Butterfly Nebula. WFC3 was installed by NASA astronauts in May 2009, during the Servicing Mission to upgrade and repair the 19-year-old Hubble. NGC 6302 lies within our Milky Way galaxy, roughly 3800 light-years away in the constellation of Scorpius. The glowing gas is the star’s outer layers, expelled over about 2200 years. The “butterfly” stretches for more than two light-years, which is about half the distance from the Sun to the nearest star, Proxima Centauri. The central star itself cannot be seen, because it is hidden within a doughnut-shaped ring of dust, which appears as a dark band pinching the nebula in the centre. The thick dust belt constricts the star’s outflow, creating the classic “bipolar” or hourglass shape displayed by some planetary nebulae. The star’s surface temperature is estimated to be over 220 000 degrees Celsius, making it one of the hottest known stars in our galaxy. Spectroscopic observations made with ground-based telescopes show that the gas is roughly 20 000 degrees Celsius, which is unusually hot compared to a t

Investors pick individual stocks to build portfolios rather than use index funds.  Our preference is to use commission free ETFs.

Next to not following “The Golden Rule of Investing,” the error of not using index funds is likely the biggest mistake investors make.  Remember – The Market is smarter than you are.  While there are investors who are good stock pickers, be realistic.  Are you one of them?  The law of averages is working against stock pickers.  The over whelming evidence is that most investors would be better off putting their money in index mutual funds or index ETFs.  Don’t get caught in the trap of using actively managed index securities.

Although these posts are short, they pack an important punch.  Fifty years (50) of investing teaches one a lot of lessons and there are still more to be learned.